Search for Duplicate Images Faster Than Ever

Visual Similarity Duplicate Image Finder 4.7.0.1 is now Windows 8 certified. The application utilizes a new cache system that provides immense speed improvement in the pre-processing stage. The improvement can be up to 1000 (no it is not a typo – thousand times)  faster depending on the count of images. Using the new cache system VSDIF can now pre-process 10,000 images in a second. It is strongly recommended to use the new cache system as consequential scans of an image library will be extremely fast.

The best thing regarding the new cache is the fact that it also detects modified files. This means that a file which was cached in a previous scan and has been modified will be identified and re-processed. This ensures that the duplicate image finder will use the latest version of every file even when using the cache system. The new cache system is available also for the “Image Search” feature and will work equally fast. Old cache files were designed for slow storage and computers and are no longer supported. 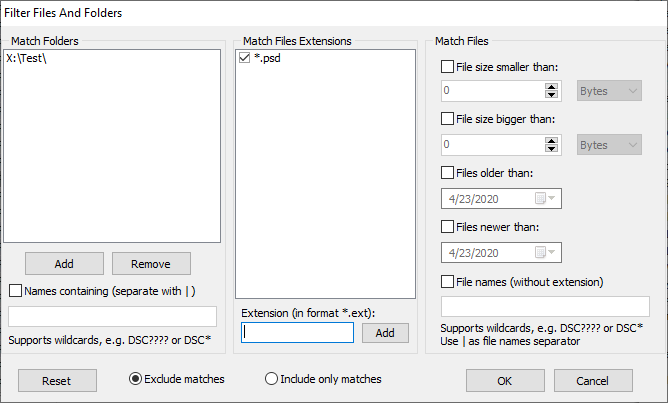 There is a new option “Check All Except First in Group” in the Auto-check feature.  An  updated browse for folder dialog can be used to navigate to a folder that is pasted from the clipboard. There is a huge speed improvement when loading large project files. The entire change log can be found here.

Do not forget to check also the free Duplicate File Finder, Duplicate MP3 Finder and Folder Size tools that will help with the disk cleanup process.

There is a new option to set the cache folder location. This is extremely useful if you have a large collection of photos and you are lacking space on your system drive.

A lot of GUI improvements and fixes are also available. You can now set each column’s auto-size attribute individually, some issues with column sizing and splitter were also fixed.

The program will check for Recycle Bin size and show a warning if you want to delete the files to Recycle Bin and there is not enough space available. Automatic delete can now also delete read-only files.

The new 2.0.0.1 major release of Audio Dedupe is packed with plenty of new features.

Monkey’s Audio is a file format for audio data compression. Being a lossless format, Monkey’s Audio does not discard data during the process of encoding, unlike lossy compression methods such as AAC, MP3, Vorbis and Musepack.
Data file compression is employed in order to reduce bandwidth, file transfer time, and/or storage requirements. A digital recording (such as a CD) encoded to the Monkey’s Audio format can be decompressed into an identical copy of the original audio data. As with the FLAC and Apple Lossless format, files encoded to Monkey’s Audio are typically reduced to about half of the original size,[1] with data transfer rates and bandwidth requirements being reduced accordingly.

True Audio (abbreviated TTA) is a free, real-time lossless audio codec, based on adaptive prognostic filters. Also, .tta is the generic extension to filenames  of audio files created by True Audio codec.
TTA performs lossless compression on multichannel 8, 16 and 24 bit data of uncompressed wav  input files. The compression ratio of TTA depends on the type of music file being compressed, but after compression the size of output file will generally range between 30% – 70% of the original. TTA format supports both of ID3  v1 and ID3 v2 information tags. APEv2 tags support has been added recently.

Visual Similarity Duplicate Images Finder 3.1.0.1 is Released and available for download. The new version can automatically log-off, shutdown, hibernate or stand-by the system after scan is finished. A new feature will let you easily rename files inside the duplicate images list. Panasonic’s RW2 raw extension support is now added. Added -cachenames command-line parameter in Corporate version, that will increase extremely the scan performance if you compare new images against a database that is not modified. This option will tell Visual Similarity Duplicate Image Finder not to check the images in the database for changes. This will save time that would otherwise be wasted in order to rescan the existing images.

In the latest version of Visual Similarity Duplicate Image Finder 1.7.1.1 you can choose weathe to store the temporary images information in the memory or on the hard disk. This will let you compare even the hugest library of images regardles of the memory installed on your system. The hard drive buffer is optimized and performs almost as fast as using memory buffer. If you have experienced memory problems in the past we storngly recommend you to download this new version.